Life Of A Single Mom: What It’s Really Like Being a Single Mother

Walking from my desk to the tiny women’s bathroom at my part-time second job, I could focus on nothing but the flat rectangular box that rested in my coat pocket. I had been feeling weird for over a week since returning from the annual “bae-cation”  to Jamaica with my long-distance boyfriend of six years. Still reeling from the Vitamin D overload aggressively dispensed by the powerful island sun, I couldn’t shake the feeling that something was “different” with my body. With each step, I convinced myself that I was crazy and that the year of celibacy prior to my trip had resulted in preggo paranoia.

I mentioned my inkling to no-one but my best friend whose superpower happened to be talking me down when my brain wanted to jump off of the cliff of assumption. “Just get a test”, she advised. We concluded our conversation with the understanding that there was nothing to worry about and this would be just a false alarm.

Despite the sage advice, I had not gone into the Stop & Shop that evening to get a pregnancy test but rather to get vitamins because I was feeling so run-down. I spotted the pink and white box as I walked the vitamin aisle and stopped in my tracks. They were on sale. This was obviously a sign from the Stop & Shop gods that I needed to purchase two boxes because who the heck just gets one? I hurried back to work because my hour of “lunch” at 9:30 PM was about to be over.

I couldn’t sit still in my chair once I got back. My mind kept drifting to the plastic bag in my drawer, pretending to belong next to the bright neon highlighters, notepads, and stapler. My anxiety was getting the best of me. I reached for one of the pregnancy tests and made a beeline to the restroom. Thankfully, the tiny stalls were both empty. I grappled with the box tearing the thin cardboard which echoed off the tiled walls. I cleared my mind and did the deed.

Setting the saturated test on a few sheets of paper hand towels resting on the toilet paper dispenser, I thought back on the first time I had experienced this same feeling. I remembered that twelve years earlier it had taken several minutes before the faint blue line had made itself noticeable enough to confirm my first pregnancy with my now 11-year-old son. This time, however, the two dark pink lines formed instantly as if to shout the response back at me.

Time was still as I stood with both hands clasped over my mouth and tears forming in the ducts of my wide open eyes. “Ohmygodohmygodohmygodohmygodohmygod…”, the words tumbled out on repeat muffled by my feeble attempts at stifling the sound with trembling hands. I couldn’t move, I could barely think. Eventually, the shaking subsided as did the tears and I managed to put the cap back on and pack the test back into its little rectangle. I clumsily stuffed it back into my pocket and washed my hands and face. Not much work would get done that night.

Life Of A Single Mom: Grappling With New Realities

I am now a single mom of two, unwed with my daughter’s father living 1700 miles away. I was even more of a stereotype, the mythical black single mother struggling to raise a family on her own. A statistic that I’m sure some sociologist can rattle off to prove one point or another, forgetting that real people are represented by his/her figures on the Powerpoint presentation he references to an audience of his peers. I was disgusted by myself.

To say it was/is hard is the biggest understatement ever. 2017 began the most difficult year of my life. The weeks following my initial pregnancy shock were an emotional roller coaster of coming to terms with my biggest fears. The cute announcement to the first-time daddy was followed by weeks of fighting and arguing over issues that should’ve been more seriously addressed before her little soul came to be.

I was filled with hormonal rage and felt justified in lashing out at him for resentment at his absence during this difficult time. I was alone, deeply depressed, and angry. My relationship was clearly coming to an end, I got laid off from my full-time job and to add insult to injury, morning sickness was making its presence known in a big way.

Life Of A Single Mom: Buried In The Darkness

Most days found me overcome with sadness, doubt, and guilt. I would lay in bed crying at my ever-worsening circumstances. No bills were paid, my car was repossessed, and I eventually lost my apartment. All the things I had worked my butt off to get were being stripped one after the other. My depression, you can imagine, got much worse.

Though I never contemplated suicide, I had my bouts of hoping I would just die, slip away during a night of restful sleep, or instantly with a sudden immediate illness. Thinking that the world and my children would be better off without me, I could see only the failure that I was at life and in love.

Self-esteem issues I thought long-buried came roaring to the surface. Questions about why I was never marriage material for the men I had long-term relationships with, or long drawn conclusions about my weight, my looks, my value as a woman –  played on a loop. It is a tortuous affair to hate oneself. My feelings of worthlessness would drown me on some days leaving me little room to breathe as I sat covered in tears and guilt. There was no shortage of reasons to feel terrible.

At my lowest point, I had a total meltdown in my OB/GYN’s office. She did not know how to react to this fat, black woman who was due to give birth soon. In her thick Russian accent, she suggested some mental health resources and watched with pity as I continued to cry. I never reached out to any of the places she suggested. Why should I? So they could waste my time telling me everything would be ok when it clearly wouldn’t? The thing with depression is, it distorts your view of reality. I could not see my way out.

At the very end of my pregnancy, my extended family came together to give me a baby shower. It was planned perfectly and everyone showed up. It was the most supported I had felt since the pregnancy had started. I was unbelievably grateful for them. Though it was a great time, I felt like a fraud. Smiling and taking photos while inside I was a knot of sadness, fear, and self-hate. I never confided in any of them how truly bad my situation was.

The day arrived, my water broke, and I rushed to the hospital in an ambulance. My grandmother tagged along. I pushed and pushed for hours and though I was fully dilated the baby made very little progress on exiting her comfy home. The frustrated doctor finally called it: I was going to have a c-section. One of the things I feared most throughout my entire pregnancy was the possibility of a cesarean. Anyone I mentioned it to had dismissed my worries as paranoia, but here I was.

At this point, my grandmother had gone back home as it had been a long night. With the knowledge of the impending surgery, I broke into a pitiful wailing with only my poor nurse there to attempt to comfort me. There I was, legs in stirrups, weak from the pain medication and lengthy bouts of pushing, crying because, just as with my entire pregnancy, I was alone and scared and wishing with all my soul that my child’s father was there. The nurse was sweet and showed nothing but empathy, rubbing my shoulder and telling me everything would be ok. I sat crying into my hospital gown.

A few minutes before they wheeled me into the operating room, my best friend showed up with a halo around her. I breathed a sigh of relief. I was not alone. Someone cared and showed up just at the right time. The surgery was successful and though I had lost an enormous amount of blood, it all ended well.

I saw her pale, tiny face, nose scrunched, crying at the top of her lungs. It was love at first sight. They took her away shortly after, sewed me up and sent me to my room. The anesthesia kicked in, leaving me down for the count for most of the day, but once I was up I got to hold her. It was the most amazing feeling. My girl was beautiful and I loved her so much. I made the decision right then that I would have to fight these feelings of inadequacy, and this overwhelming sadness, because she deserved a mother who did more than cry all day.

So I fought through the recovery from surgery, I also fought back against the sadness. This tiny person who totally depended on me for survival was infusing her own brand of strength into my being. It was incredibly difficult and there are many days that the battle is not won, but I am much better at recognizing when I need to fight my own thoughts. I have more and more days when I am able to see the world through a much more realistic lens.

My daughter is now 9-months-old, reaching all the milestones outlined by every book and website that I glued my eyes to during pregnancy but looking in her beautiful brown eyes makes it all worth it. The inability to walk throughout the final two months of pregnancy, the overwhelming emotion that spurred daily crying marathons, and even the C-section that left me out of commission for over a week after childbirth, only stand to make my love for her that much more alive.

In my daughter’s eyes, I see the long road to her womanhood that no doubt will seem to pass too quickly for me to let go. This little person manages to give me the fire, the strength to push past the dark recesses of my mind and see that there is still joy left to be had.

Self Love: Love Yourself Before You Love Others 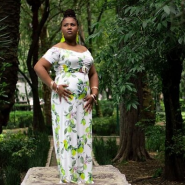 Harnessing The Power Of Personal Agency

How To Let Go Of A Relationship? He Already Let Go of You

How Being Stuck In A Pandemic Changed My Life

The Happiness Project: A Week Of Extreme Nice

COVID-19 Pandemic Ruined These 5 Things For Me